"They’ve pretty much given me hope that there are good people in this world": The Kirklees and Greater Manchester Better Outcomes Partnerships

Manchester Metropolitan University’s (MMU) Policy Evaluation and Research Unit (PERU) has been contracted to evaluate the Kirklees Better Outcomes Partnership (KBOP) and Greater Manchester Better Outcomes Partnership (GMBOP) programmes. As part of this evaluation, People’s Voice Media have used the Community Reporting methodology to allow people who access aspects of KBOP and GMBOP's support to share their experiences of the programme. As part of an ‘open call’ process, in which people could self-select to join a small group storytelling workshop, drop-in 1-2-1 storytelling options and online/telephone 1-2-1 storytelling sessions, we spoke to several people about their experiences of accessing support via KBOP and GMBOP. These stories provide insights into current practice and how services might be improved. Some of the findings from the stories are presented here in this analysis. Where relevant, the insights have been mapped to outcomes in a Theory of Change produced with PERU for the KBOP (Fig. 1) and GMBOB (Fig. 2). 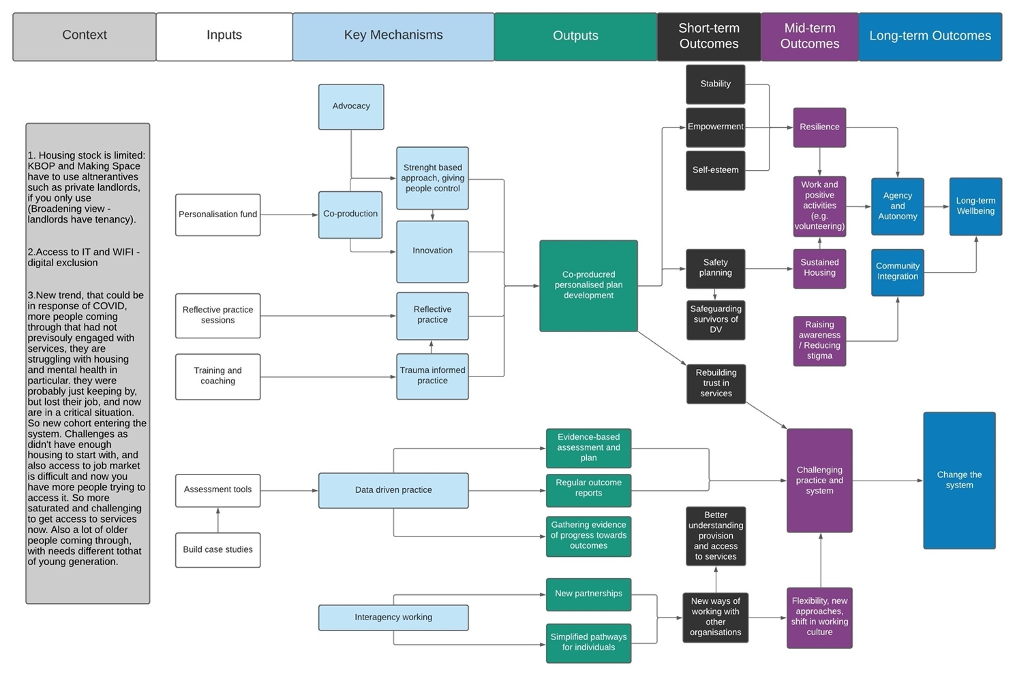 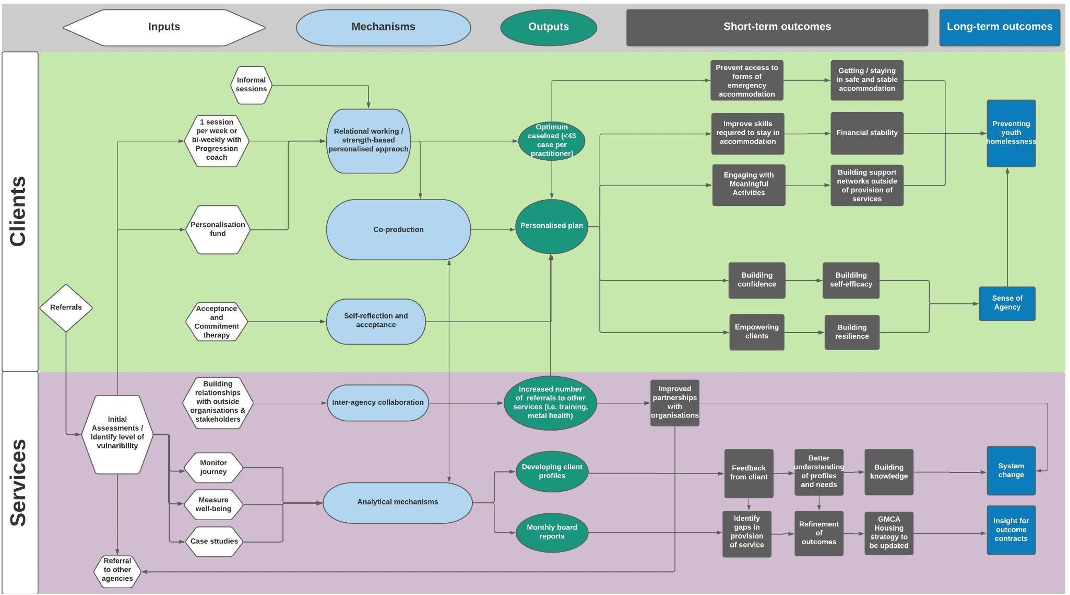 “For the first time in a long time, I were actually listened to as a human being”: The Kirklees Better Outcomes Partnership

KBOP was launched in September 2019, commissioned by Kirklees Council. The service is for people at risk of homelessness, but where that risk is not immediate. Instead, it is often for people struggling to maintain housing tenancies due to their support needs, such as substance misuse, domestic violence, poor mental health, offending, being a refugee or a care leaver. The programme is designed to provide an asset and strength focused approach that is tailored for people over the age of 16, and brings together the expertise of the organisations involved to support people with a range of complex social needs. They take a person-centred approach, tailoring their support to individuals who access their services, which offer support across four main areas: housing, health and wellbeing, education and employment, and support with domestic violence.

There is an overwhelming sense from the stories that the people who access KBOP’s services find the person-centred support to be one of the biggest benefits – especially when compared to prior experience of other support services with a less tailored approach. One storyteller speaks about how they were referred to KBOP after having issues with another service that was meant to be supporting her. With them, she struggled to maintain appointments and apply for support, but KBOP have helped her turn this around and he now feels more independent: “Longer term support has been the best thing for me knowing there is no timescale and that will only end when I am ready for that is really reassuring for me.” In saying this, she demonstrates the short-term outcomes of stability and empowerment. Another storyteller, who was diagnosed with depression at 15, talks about having had negative experiences with mental health services. She only felt she got “help that helps” when she was referred to her support worker at Connect through KBOP. She talks about how she fully expected to be let down “like normal” but she wasn’t. “To be fair,” she says, “I speak to you more than I speak to my mum sometimes. And to be fair, I look forward to speaking to you more than I do my mum [laughs].”

In saying this, she highlights not only how KBOP is rebuilding trust in services, but also how readily available the KBOP support is, with storytellers describing one-to-one, on-demand support that’s there when they need it. One storyteller, who had previously been suicidal after becoming a wheelchair user, speaks about KBOP – Fusion Housing in particular – who have helped through a one-to-one phone support service, providing them with help using the choose and move system and with securing funding.

KBOP - They’ve been absolutely fantastic, since I was down at the lowest of my lowest at one point in my life - I’ve had phone calls every week and now I’m gonna be doing that Zoom I just have to learn what it’s all about. … If I ring Fusion itself on their contact number they’ll always take a message and pass it straight onto Lisa and she’ll ring me in the next 10-15 minutes. … They’ve been like a friend, I don’t get people ringing me, I don’t have a social life and they’re always there. When I get into this bungalow they’ll be there to help to make sure I’ve got things up and running - the support has been well promising for me.

Another storyteller, who was referred by his GP during the pandemic, elaborates on this:

To get the mental support, even if it were just phone calls every couple of days to see how I were getting on, you know, and setting little targets and goals – just manageable ones as well. And for the first time in a long time, I were actually listened to as a human being and I think, for me, that meant a lot. … And with me being a recovering alcoholic, it would be so easy to grab a drink to get on the phone like that, but I never felt I had to with their support.

He really credits the one-to-one service and being treated “as an individual” with his improvement and his recovery. Another person who has struggled with mental health issues says how she feels very supported by KBOP and how they help her with many things. If it’s beyond their scope then they always refer to someone that can help. She emphasises that they genuinely care, which makes them stand out.  They ensure she has the support she needs to apply for and access things rather than being left alone, this has helped her live more independently. “Their help has been more helpful than past help as they are more active.” These stories demonstrate, as we have already seen stability, empowerment and rebuilt trust in services, but also better understanding of provision and access to services.

Another storyteller talks about how KBOP have given both practical and emotional support:

They are compassionate and caring having a place to talk and explore what I am feeling was amazing, even researching things to find me support groups and websites where I can find people going through the same things I have.

She is particularly delighted with her key worker, and the staff in general who she describes as “so warm and welcoming, and you really feel that.” Another storyteller says of her support worker, “she’s just right good to talk to,” and describes them as having a “bond”. She talks about how, as well as helping her gain qualifications, she was also offered more pastoral support in the form of trips with her children, provided by Hopeful Families who KBOP referred her to, as well as getting her tickets to inspirational speaker events, helping with her depression and self-esteem (another of the short-term outcomes).

Another storyteller was supported by Fusion Housing at a time when they were dealing with alcohol addiction and, as a result, had their children taken away by social services. They credit their support worker with helping them through this period and assiting them in getting their children back among other things:

The stories gathered from people who use KBOP’s services show that the service is achieving many of its aims and that its person-centred approach has been warmly received. In fact, several storytellers say there is nothing that needs to be done to improve the service.

GMBOP is a social enterprise set up in partnership with the GMCA, to co-produce and deliver Greater Manchester Youth Homelessness Prevention Programme. This is a 4-year programme targeting young homeless people in Greater Manchester. It is being delivered locally by DePaul and referred to as ‘Pathfinder’.

One young storyteller talks about how the Pathfinder programme has successfully supported them throughout their experience with homelessness. When compared to other services – such as a Council operated one – they feel Pathfinder is better for them. They talk about how ineffective other services have been in helping them gain support in the past. Through this, they highlight how the person-centred approach of Pathfinder makes them feel like they are truly cared about. They don’t just feel like another number or means of securing funding.

The storyteller talks about how prior to receiving support from Pathfinder they were going through a crisis and experienced a lot of anger. During a visit to A&E representatives from the Pathfinder programme came and supported them. Having no family or support system around them at that time, the presence of someone who showed care made them look at life in a different light.

Support from Pathfinder has helped them to control their anger; they are now much better at controlling their anger levels and feel more relaxed. They credit their life to the programme and openly state how they don’t believe they would be alive if it wasn’t for the support received from the programme. The storyteller feels after gaining support they are more independent and are proud of who they have become as a person.

The storyteller explains that the 1-2-1 support they received from the programme via phone calls provides them with a moral boost and sense of positivity. They also talk about how the support they’ve received with paperwork and ‘jumping through hoops’ was a huge help. They explain that issues with paperwork and documentation relating to gaining support as a homeless person is a real barrier. They question how Councils and other services can expect people to understand and independently fill out complicated forms. Pathfinder has been beneficial in helping to navigate this bureaucracy.

The young people’s experiences of the service has been positive both in terms of their interactions with the professionals working in the service and the impact it has had on their lives. When compared to other similar services, Pathfinder is seen as being more suitable for the young people due to (a) the person-centred approach and (b) how it helps them navigate challenges to accessing different forms of support. This means that the young people are reassured by the support they are receiving and suggest that it will be key preventing a return to homelessness.

You can listen to stories from both strands of this project below.