Story of Shielding for a Year 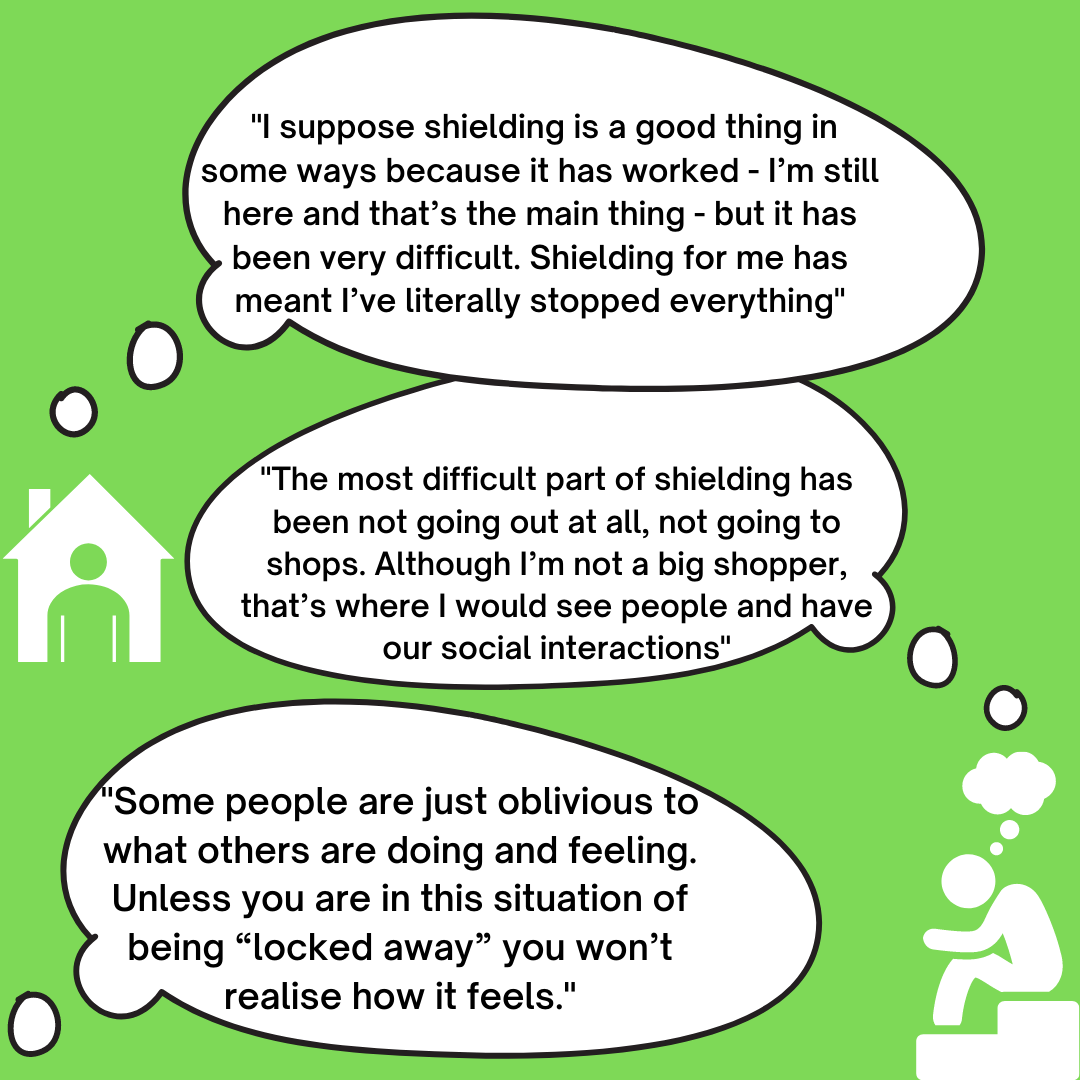 What it’s Been Like to Shield for a Year: Ash Smith's Story

I’m feeling a bit better this week than last week, but that can all change so easily. I’m still shielding until 31st March according to the last letter I had, although they are making an announcement the day after that about lockdown lifting so we’ll see. Obviously, I don’t want to jump straight back into the community, but I have had my first vaccine injection so I’m feeling a little more optimistic and a little less scared about getting back out there.

I’ve been fully shielding for the last year for my own safety as well as everyone else’s. I’ve found it very difficult. I’ve always been a working man, but I’ve gone from doing that to suddenly not being able to. It’s been 35 weeks now, as soon as I was about to come out I got another letter saying I’m “clinically extremely vulnerable” as they put it, and I had to continue, so I’ve spent most of my time shielding. I suppose it’s a good thing in some ways because it has worked - I’m still here and that’s the main thing - but it has been very difficult. Shielding for me has meant I’ve literally stopped everything. I take my wife shopping in the car but I wait in the car while she goes in and I don’t get out at all. I’ve been stuck indoors or in the garden. We have a bubble going on with one of our daughters so that we can look after our grandson so that she and her husband can continue to work, but I’ve got 5 other grandchildren who I’ve barely seen this last year. And I’m not just talking about me, even though my wife is working, she can’t see the grandchildren because she is shielding me. Everyone else is in the same situation, peoples of our age have grandchildren who they can’t see at all and it is really difficult. It’s particularly difficult for the youngest ones – how can you explain to a 4yr old or even 7 yr old what its all about? With the grandchild that stays with us we just call it ‘the invisible bug’ and he just knows that he has to be careful, but what else can you do for a 4yr old to understand.

The most difficult part of lockdown has been not going out at all, not going to shops. Although I’m not a big shopper, that’s where I would see people and have our social interactions. Me and my wife are tee total so we don’t go to the pub. We would just meet people in town when we were out shopping. I’ve got very few friends in terms of people to phone me all the time and I don’t phone other people much. I’m a very private person in that respect. So I just don’t get to talk to the people that I do know and associate with at all while shielding. We’ve got one particular set of friends that we grew up with - we are that close that all my kids call them auntie and uncle. But he’s shielding and I’m shielding so we haven’t even been able to go out for a meal with them or anything like we used to at all  in the last year.

I would say I miss working, but I’m not sure that I do as I feel I might have done my fare share. I worked front of house in a plumber’s merchant serving customers, advising them and putting orders together. I do miss being there really, I was in there every day with 20-30 plumbers coming through and you have a conversation and laugh with them. I’ve lost all of that. Something else that I’ve found out is that no matter how long you work somewhere, no matter how close you think you are to people you work with, you don’t hear from them again when you leave. I finished work around March 18th last year and I haven’t heard from more than 2 people that I got to know in all my time working there for 12 years. Oh I do miss that, the interaction with colleagues and customers.

I had taken some time off in March as my wife was supposed to be going on holiday to Ireland (which obviously she never went on!). Four days into that I got a letter telling me to shield so I was put on the furlough scheme, which as I understood it, was a way to manage the retention of jobs, so I thought ok great I can put up with that, they are going to look after me after twelve years there. Then in July I got a letter to say they were making me redundant.  I still feel that was due to that fact that I had severe health issues the previous year, and although I’d gone back to work after being off in hospital, I wasn’t able to do as much as I used to do. I still did my job to the best of my abilities, most of it was computer based anyway, but it felt like an excuse to get rid of me. I never went back after that first lockdown ended. I had even offered to work from home doing the admin that I had previously done in store, but they wouldn’t let me. I felt like they were using the fact that I had to shield as an excuse to “get rid of the dead wood”, which is such a shame as I had so much respect for that company after so long there but have lost all respect for them now.

Because of my illness and disabilities, its difficult to apply for another job. I use a stick to walk and I can’t breathe well, I’ve got too much against me. I’ve actually got a call coming up to see if I’m applicable for PIP. Although I still feel I have something to give, I struggle too much with day-to-day tasks and I have deteriorated and will keep deteriorating.

I do admin a community Facebook group for a village, which keeps me interested. I don’t do much on it, just help it run, but people do say to me that it has brought people together. People post old photographs and old memories, especially at the moment while they’re all at home more.

I prefer going to smaller shops and I think its totally unfair that they are not allowed to open and the big chain ones who sell exactly the same stuff are. I’d feel a lot safer in a little independent shop in town than walking around a supermarket with loads of people pushing past me. I don’t understand why the big supermarkets are allowed to continue while the small shops aren’t all allowed to open. I’ve noticed that some of them have shut down which is a shame, like the teddy bear hospital. Some people may wonder why its such an impact but we used the shop, to buy stuff and to get toys mended and we enjoyed it. Who wants to go to big supermarket every day?!

Unfortunately there’s still a lot of people out there who won’t use this opportunity to change their behavior, they just want to do what they want to do even if it is selfish It feels like there are so many people out there who don’t want to change. One of the things that has annoyed me most about this pandemic, is masks being discarded everywhere – I even saw them chucked on the ground right next to a bin when I was on a hospital visit! What are these people thinking about?! People should learn to respect the world around them and make the most of what we’ve got. I’m not a big environmentalist but I can see what we’re doing tot his planet, and this last year has given us a bit of a wake up call to see the effect we are having.

I don’t think we’ll ever lose that ignorance unfortunately.  Some people are just oblivious to what others are doing and feeling. Unless you are in this situation of being “locked away” you won’t realise how it feels. It’s made me really grateful that I’ve always been such a law-abiding citizen as having gone through this shielding, it’s made me realize that I wouldn’t be able to survive prison. You can’t see anything other than your own four walls and the loneliness is unbearable. At least with this I’ve had my garden and my wife but I just wouldn’t want to ever got through this again, it’s a horrible feeling. We are just going to have to learn with this, like the flu and other viruses. We’ll just have to learn to control it as best as possible and carry on.