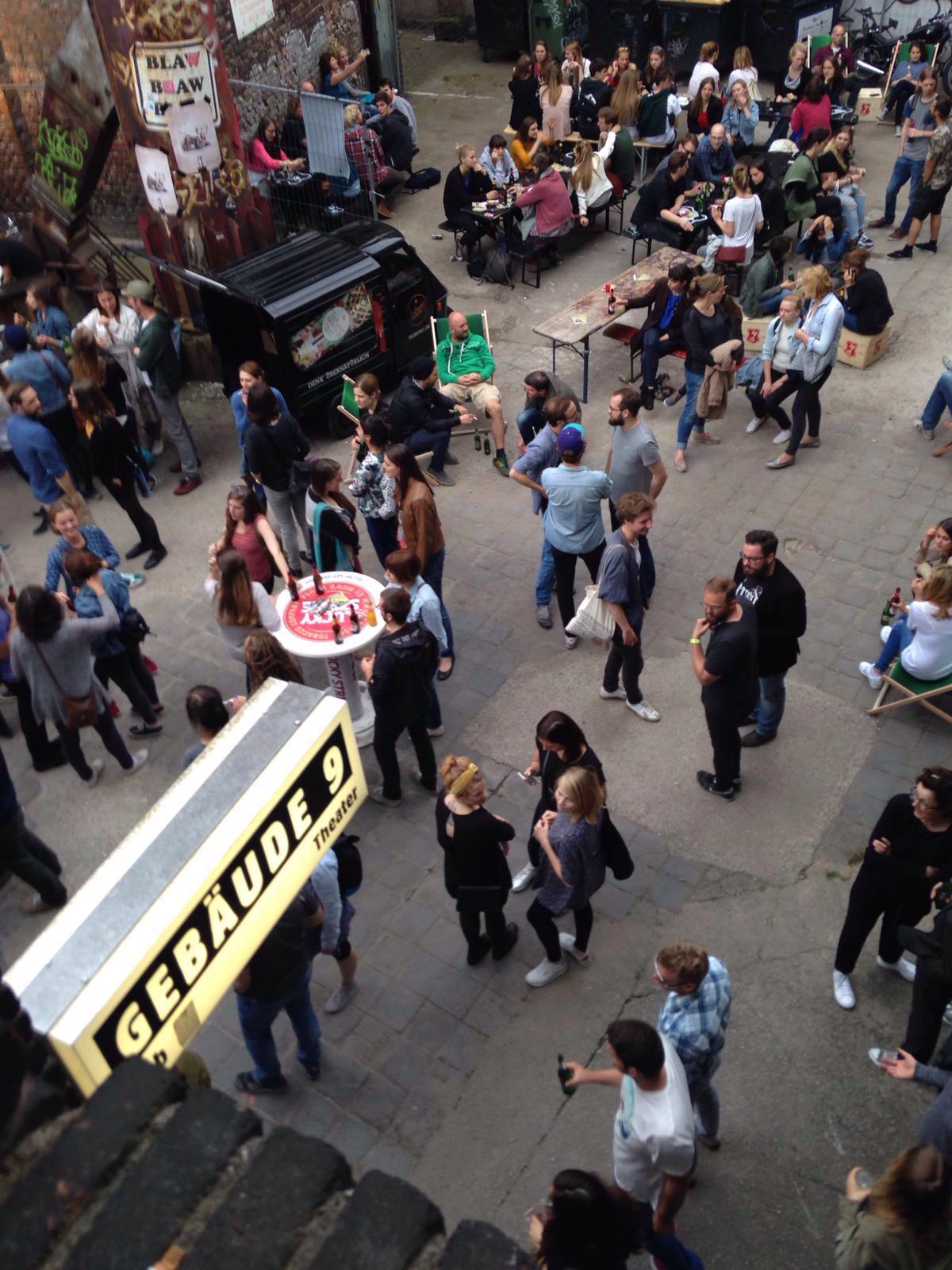 On the 21.05.2016 "Gebäude 9" in Cologne hosted a musical evening full of diverse artists called the Cardinals Sessions Festival II. The night before the festival already was in Hamburg, and for the second night the artists traveled to Cologne.

We've been welcomed with a free taste of "Taiberg", a vegan, gluten-free, lactose-free refreshing energydrink. Around 18:00 the first viewers entered - an audience made out of different ages and genders. People bought themselves some drinks or some food and sat down on the given chairs and benches. Some sat on the ground, which additionally to the quiet music coming from the boxes, invited everyone into a chilly and relaxed atmosphere. The offered food was from the "Bunte-Burger"-foodtruck and they had a fresh-made, vegan festival burger and sweetpotato fries. While everyone chatted, the atmosphere grew more into excitement and anticipation. At 19:30 everyone went into the main hall, and newmoon took the stage. Their loud sound surrounded the audience and I knew my ears would start beeping the moment their performance ends. The musicians performed emotionally and it was hard not to get lost in their rock sounds. Apparently there were problems with the sounds so the band finished their performance after just two songs. For the next act everyone stepped out of the hall and gathered themselves on the outer courtyard. No stage there, FIL BO RIVA was standing right in front of the audience, only their microphones separated the musicians from the listeners. Especially this turned the performance into something more magical. Someone in the audience started blowing bubbles and the homelike, cozy atmosphere of the yard, the innocence of the bubbles fitted perfectly wih the deep melodic songs of the sympathic duo. After their performance the two men thanked everyone for coming & listening, everyone stormed into the hall again to get ready for Lola Marsh. With the flower crown and her long dress the lead singer resembled the image of a fairy queen, she was so in control, and with that amount of confidence they started their show. Lola Marsh did something this night no one else did, they performed with the audience! For the song "You're Mine" they needed us to clap and another song they introduced with the beg to hug each other. So we hugged each other while they sung their song, and everything seemed to intimate. After the miraculous performance finished it was time to gather around the two microphones on the outer yard again. The New Poor contains of a girl and a boy with a guitar. They seemed unremarkable, but the second they opened their mouth everyone was bonestrucked. First it is really hard for two singers to harmonize together, but these two made it seem like they were born to sing together. His voice was as soft as a summer breeze, and hers - so unique and recognizable - fitted into every note and every word of their selfwritten songs. They describe their music as romantic-realistic songwriting, and I could not chose better words to describe them and their music. When they were finished the applause wont stop and everyone was asking for another song, but due strict time schedule hey just thanked everyone and bowed. The next performance by Andy Shauf took place in the main hall again, so we went back inside, which was good, because it slowly started to get colder & cuddly pressed together we enjoyed the special sound of Andy Shauf. Instead of half an hour they played for an hole hour. The audience moved to their specific, relaxing more quiet accords of music. After their performance a half an hour break was settled so we had the time to finally eat something. Sadly, the sweetpotatoefries were out, so we got the vegan festival-burger for 6,50€. We sat down on the ground talked with new friends and enjoyed the comfortable atmosphere and the slow backroundmusic that just mixed perfect with the quiet chatting noises. The next act, Dale Barclay, with their loud woken up every tired bone in our bodies that might happened during the half hour break. Their performance was fullbodied and overwhelming and after they were finished everybody was kind of hoping for something quieter for the closure. Glints is the dutch band called and after a few vocal test they started. The perfect mix of sprechgesang, their emotional but playful way of working with their instruments and their catchy refains took the audience to some place they haven't been this night. It was for dancing, or for standing against the wall, it was a perfect closure for this evening of various music performances. After they finished it felt like the applause could continue for hours.

We left the place with merch of our now favourites, new CDs we were exited to listen to, new friends we found in the crowd, hurting feet from standing that much, and the best memories. Thanks for that, Cardinals Sessions!