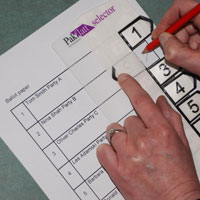 I bumped into David on the bus home today. He told me that he's given up on postal voting because for him it's a bit of a faff, getting the form filled in and having it witnessed. He said that he would "see how he gets on at the polling station" this time instead.

David is registered blind, so a standard ballot paper is no good for him. I asked what's provided at the polling station to make things easier for visually impaired voters.

He told me that there's a template sheet that sits over the top of the ballot paper, with a series of holes corresponding to the spaces where voters can place their X.

The boxes are numbered on the sheet, which is tactile so that you can identify where to place your mark. A member of staff at the polling station will read out the options for you, so that you know which candidate corresponds to each number. Then you can be left to cast your vote in private, fold the paper over and take it to the ballot box.

Until this chance conversation, I'd never thought about how unsighted people cast their vote on polling day. I know that on the list of polling stations, there's something to say how accessible each venue is - for example, whether there is a ramp for wheelchair users - but I've never really thought about the ballot paper itself.

It strikes me that it's quite easy for most of us to vote, and yet a lot of people don't bother. At the same time, there are a lot of people who might find the process of voting more difficult, but who always make the effort to use their vote.

David also asked me when I thought there might be electronic voting used for the elections in Kirklees. He pointed out that this would create some new options for people with disabilities.

As I made the short walk home from the bus stop, I found myself thinking about how elections have evolved over the years. I wonder how the process might change in the future.