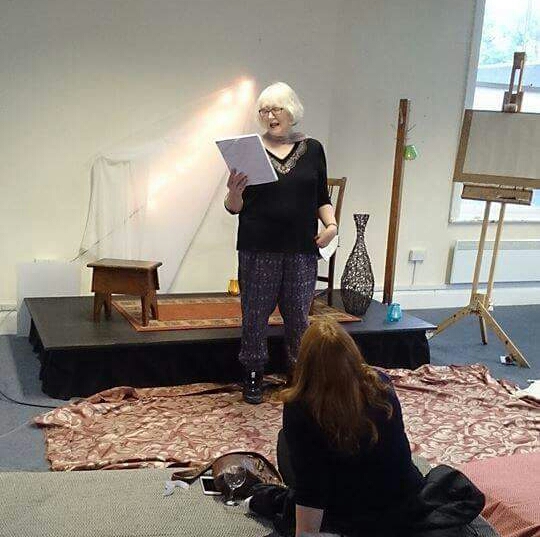 A series of upcoming presentations found me feeling somewhat apprehensive, they're not my 'thing'. If the topic I have to discuss is something I'm not enthusiastic about, I find presenting it nerve racking. I strongly dislike feigning enthusiasm for something my 'heart' isn't in, If I'm obliged to, I suffer physically with anything from headaches. to an upset stomach.

With the hope of learning a few tips on how to 'act as if', the topic was the 'best thing since sliced bread' I signed up for a voice workshop.

I didn't have the expectation that one or two lessons could help me overcome my reticence completely, or that I'd become an actress overnight. The class teacher however was an actress and experienced voice coach, and gave me just the right amount of complimentary and encouraging comments. She thought my existing use of voice and body was effective for the task.

'Have you ever done ballet? she asked, as I performed a particular arm movement, part of the warm up routine for the workshop. It possibly being 50 years since I'd done a demi-seconde or an en avant, and now being more of a sugar plump, than sugar plum fairy! ........I thought she was just trying to be kind, she told me however, that many people, including herself, found that the arm positioning didn't come naturally. I can't say her compliment had me thinking....... 'I've possibly a latter day career as a ballerina in the offing', but the amusing thought did cheer me up.

Whereas I care less these days as what people might think about my appearance, it is still a morale boost if someone pays a sincere compliment.

Having done the preliminary warm-up stretches, the teacher wanted me read some set pieces aloud. As an aid to finding good breath control while reading, she first asked me to do what she described as breathing 'movements'. I found the idea of breath work being movements, preferable to some breathing exercises I've previously experienced at similar workshops, where having been directed to breath 'properly', I've held my breath a bit longer than advisable!

One of the readings was a poem, and though the location of the workshops was in a leafy laned, backwaters of LS6, the poem transported me via sea-going vessels to more exotic climes, and to returning home again through the choppy waters of the English Channel.