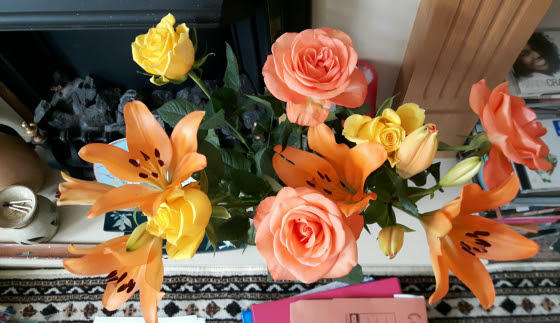 As the summer turns slowly into autumn, the glorious days of late summer have made up for this summers later than usual start.

A bunch of orange and yellow blooms, bought at low cost,  helped to further prolong my summer break from course timetables.

I don't have a garden and so I have to rely on simple bunches of fresh cut flowers to bring nature indoors.This bunch, with their sunburst of colour, daily lit my north facing room.

Despite the heat of late summer days the fresher mornings and evenings, together with the early turning colours of green foliage, herald autumn with its own promise of orange and gold shades.

Orange has long been a colour that holds some poignant memories.

Here a fresh cut, orange rosebud worn in the hair, on a certain October day moons ago.

They were 'bell bottoms' in every sense, as I had sewn tiny bird bells down each outside leg seam....

..'in the jingle jangle morning,'

usually evenings, I tramped around my favourite haunts in them.

Although at that time considering myself shy, I did of course wish to be seen by that 'certain one'.

I can't have been too shy as the bird bells and bright orage bell bottoms ensured I was both seen and heard!

Although the lyric, 'jingle jangle' was more likely about the jangled, on edge nervousness of recreational substances than tinkling bells, I had in mind their 'tambourine in time'

Not being green fingered I don't know which flowers are late garden bloomers, but each autumn a particular type of orange rose blooms in a neighbours garden. They are often still around to greet the frosts and mists. I admire their tenacity.

This is the time of year I feel most wistful, and enjoy these late blooming roses in their inevitable fading beauty, but admire their determination to hold on, adding their own splash of colour well into the "season of mists' and greyer frosty days.

The song 'Misty Roses' by Tim Hardin, a person much troubled in mind,suits them well, one dare hardly touch them, as their now frozen leaves may snap.

As my eyesight changes, bright colours have become increasingly important to me. My household  filing system is colour coded in bright luminous colours, this not only ensures I can locate them easily but also acts as a memory aid.

Shocking pink is the finance file!